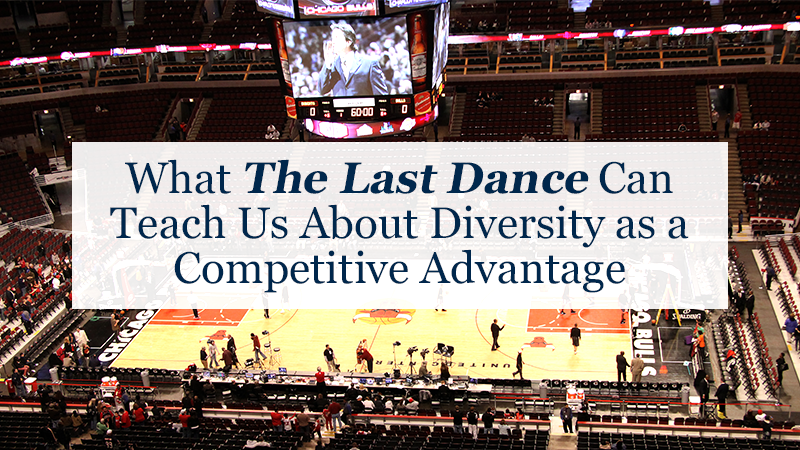 It was to be the comeback of all comebacks. The most celebrated athlete in the world was making his grand return from a nearly two-year hiatus to the sport that he loved. He was returning to his old teammates and old city, both of whom desperately awaited his return. The world waited with bated breath as the Chicago Bulls made their way through the remainder of the 1994-1995 season poised to seriously contend for the NBA championship. The city of Chicago was practically bursting with excitement and had started making the plans for the celebratory parade to conclude that season as they cheered the return of the championship trophy to their city. Enter REALITY!

The triumphant return was not to be. What Michael Jordan realized is that during his absence (a little less than two years), the competitive landscape of the NBA had completely changed. The Eastern Conference which was previously known for its “rough and tumble” style of play was now being dominated by nimble, athletic and physically imposing superstar personalities surrounded by perfectly crafted role players that, in their own right, were only a hair away from superstar status themselves. The days of the gritty but unskilled New York Knicks, Cleveland Cavaliers or Detroit Pistons had come to an end. This is the era of the Orlando Magic anchored by the most freakishly athletic hulk of an athlete, Shaquille O’Neal. It was the era of perhaps the deadliest shooting guard in the league, Reggie Miller, encased in a team of role players that rivaled any in the league. This, of course, didn’t even account for all the fast, seasoned and skilled teams in the Western Conference that were now poised to dominate the NBA for seasons to come. The 94-95 season ended with the Bulls’ disappointing elimination in the second round of the Eastern Conference at the hands of Shaquille O’Neal and the Orlando Magic. MJ knew something had to change.

With the recent airing of The Last Dance, there has been much conversation around Michael Jordan’s compulsive desire to win. There was significant focus on his unrelenting work ethic and tyrannical motivational style. Perhaps the most overlooked attribute that was responsible for the subsequent success of the Chicago Bulls following their 1995 early exit from the NBA playoffs was his ability to recognize the need for change in his existing roster. MJ had the foresight and understanding that the roster needed to diversify its capabilities while more centrally tightening the core values it stood for – superior work ethic, sound fundamentals and smothering defense.

The cast of characters changed drastically from 94-95 to 95-96. From a skill perspective, the team couldn’t have been more diverse; yet equally as dominating as a unit. MJ even went as far as to recruit former rivals because he recognized their mastery of specific skills and commitment to common values that were desperately necessary if the Bulls were to ascend to the top of the league once again. This list of former foes included John Salley (of the Detroit Pistons), Ron Harper (of the Cleveland Cavaliers) and perhaps the largest gamble of them all, Dennis Rodman (of the Detroit Pistons). For those of you who are fortunate enough to remember the bitterness of those playoff rivalries between each of the respective players and MJ’s Bulls, you know how difficult a decision that this could be for someone of MJ’s ego. 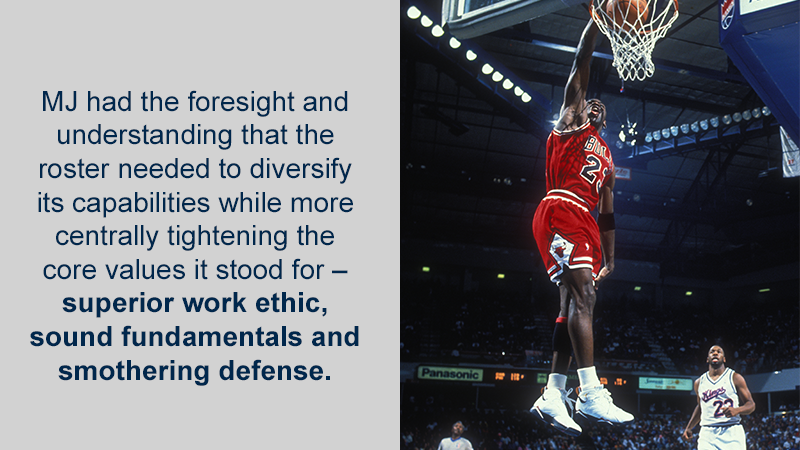 Diverse skills on the court won basketball games, certainly the mismatch of upbringings and diverse backgrounds would tear them apart. Steve Kerr, the marksman of the squad, was the son of a diplomat. MJ himself, was from a grounded but working-class family in suburban North Carolina. Tony Kukoc, European star turned NBA role player, hailed from a war-torn corner of Europe. Scottie Pippen was one of twelve children growing up in rural Arkansas with few luxuries to speak of. Dennis Rodman, the self-described “cleanup man”, lived a very troubled and meager life as an abused adolescent who found himself homeless multiple times during his youth. As diverse as the backgrounds of these players were, there was one common thread that tied them together – a shared value system.  Each had shown an unwavering commitment to hard work and preparation to position themselves where they were in their careers.

The three consecutive championships that followed, 1996 to 1998, were evidence that the diversity of skills and commonality of purpose that MJ bet upon was a bet well placed. While there is no evidence that MJ and the executive staff gave the diverse backgrounds of the Bulls cast members significant consideration; what is clear is that the diversity in their various skill mastery was strongly considered. Some would argue that those skills were a result reflection of the backgrounds that each player came from. Regardless, the superficial differences among them didn’t mean very much to MJ, the executive staff, or the fans. The focus was squarely on their record of success which resulted in 3 league championships and the second winningest season in history.

We in the business world, especially those among us responsible for building organizations designed to create value for our customers and investors, could learn much from the construction of the 1996 to 1998 Bulls teams. To win, it takes an objective understanding of the realities of the organization and the landscape in which it competes. That understanding has to be leveraged to identify the RIGHT talent necessary to lead the organization to victory. That talent is not based upon the attributes that we are COMFORTABLE with, SIMILAR to, or always in AGREEMENT with. That talent is based upon their ability to make us STRONG in areas necessary to allow us to compete and win.

It is the commonality of values that should be our guiding principle in inclusivity. As leaders who can leverage true objectivity, we will find ourselves ignoring superficial differences and focusing on value added attributes. In such case, we will have found ourselves leveraging diversity as a true competitive advantage and reaping all the benefits that come along with it. For those that choose not to, we will wave at you as you sit along the roadside watching our championship parade!